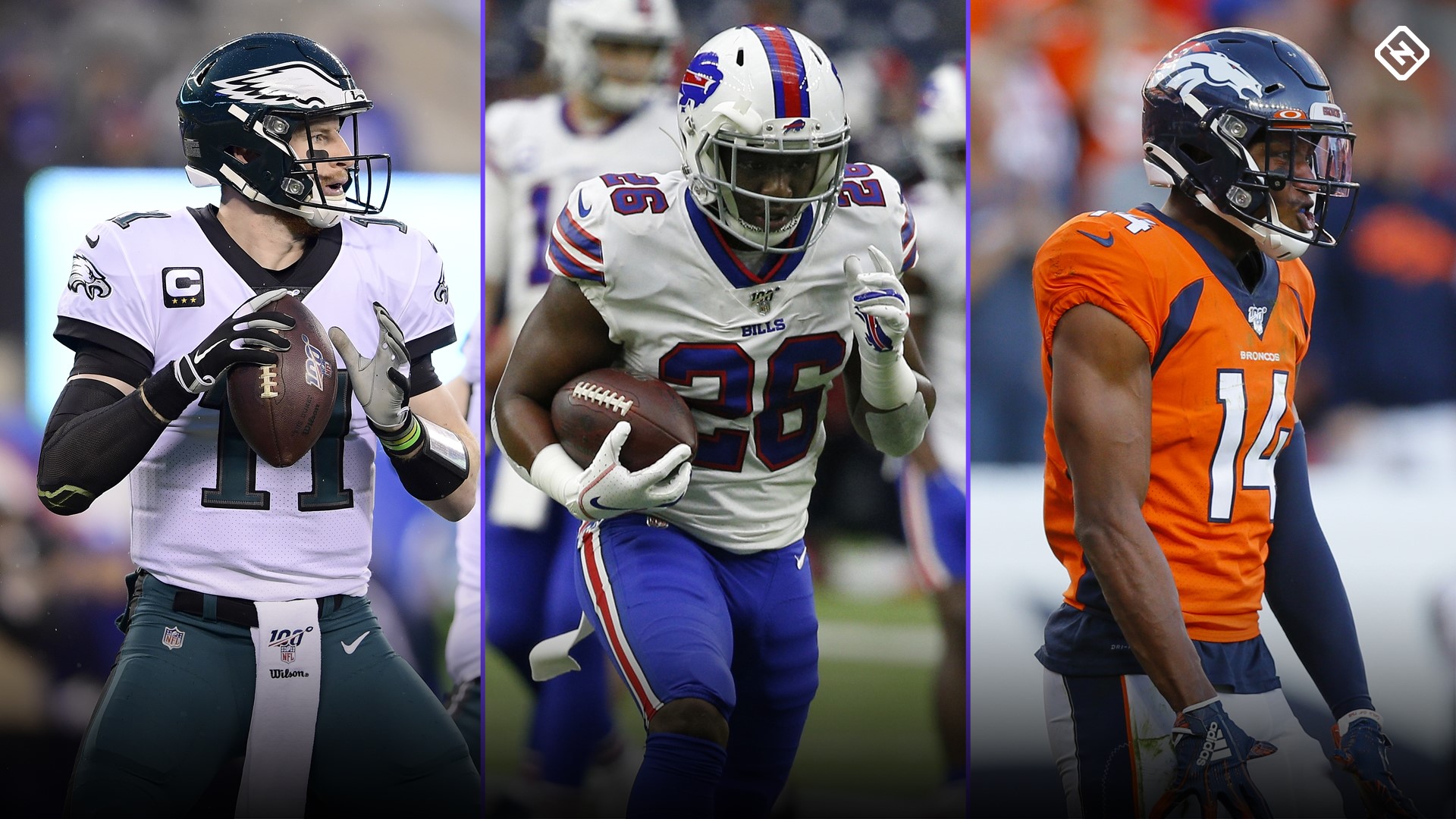 Fantasy football owners often like to embrace their task as if they’re real-world general managers. Keeper/dynasty leagues take that a step further, although they come in all shapes and sizes. The classic meaning of a dynasty league is that you can keep as many players on your roster as long as you want to from season-to-season. Others fit the “keeper league” criteria where each season you carry over a portion of your roster to the next year. Regardless, anyone involved in a dynasty league — especially if they’re playing for the first time — could benefit from some tips and advice.

That’s what we’re here for — to help you win whatever format fantasy football league you play in. Dynasty leagues come with more temptations than a standard league, such as the allure of youth and the distaste for aging players, and that creates shifting values that lead to more unexpected outcomes.

Before getting into our advice, remember: Dynasty leagues, more so than standard leagues, come with settings and roster arrangements often unique to any other league. So, it’s hard to get into specifics when giving advice. Rather, we’ve gone with some strategies that can probably be applied to your league, at least to some extent. Whether a new dynasty owner or old, finding a new way to think about your league is never a bad thing.

Whether you’re starting a new dynasty league this year with a massive draft or have been established for years, it can be easy to overestimate how long a player will be helping your team. As we know, football is a violent sport. Career-altering injuries happen, and declines are often rapid. Each position is different in these regards, too. So, when you’re drafting or making a trade, it’s important to remember how long players remain fantasy relevant.

We’ll break this down by position, looking back at the top 10 at each spot by fantasy points in 2017. That will give us a good idea as to whether players at a given position last as relevant contributors three seasons down the road.

The top-10 fantasy quarterbacks in ’17 were Russell Wilson, Cam Newton, Tom Brady, Alex Smith, Carson Wentz, Kirk Cousins, Matthew Stafford, Philip Rivers, Drew Brees, and Ben Roethlisberger. At best, you could make the case for five of those guys as top-10 preseason quarterbacks for this season, and that’s pushing it. In some dynasty leagues, Smith, Rivers and maybe Cousins wouldn’t even get drafted.

The top-10 fantasy running backs in ’17 were Todd Gurley, Le’Veon Bell, Kareem Hunt, Alvin Kamara, Melvin Gordon, Mark Ingram, LeSean McCoy, Leonard Fournette, Ezekiel Elliott, and Jordan Howard. While these names might all make it on fantasy rosters at some point in ’20, only Kamara, Elliott, and maybe Fournette have held or grown in value. The rest have seen declines due to injuries, aging, or the simple emergence of other players.

Of course, those 40 names are just examples from one season compared to now. This is meant to serve more as a reminder that a good thing in football doesn’t often stay that way for long. If you’re going to bet on positions long-term, QB and WR make more sense than RB, but these lists prove that even the passing game isn’t fool-proof to this thinking.

If these lists prove anything at all, it’s that maybe it’s best not to look too far into the future when constructing your dynasty roster.

Don’t fall head over heels for youth and potential

You’ve gotta love a segue from one section into the next. For any dynasty league owner, especially those new to the format, the idea of keeping players rostered for many years has the potential to drastically change thinking. It’s easy to almost forget about this year while considering what could happen for years to come.

In the case of a startup draft, that can have a major impact on how teams are constructed from day one. Every league will have the owner who drafts 75-percent rookies and some second-year players. That owner’s starting lineup in 2020 might be consist of guys like Joe Burrow, Cam Akers, D’Andre Swift, Brandon Aiyuk, Justin Jefferson, and other first-year players. It’s exciting to draft players who are still going to get better, sure, but the odds that all those players become every-week fantasy starters in the future isn’t sky high, never mind how unlikely it is that’s a winning core for this season.

It’s important to consider youth and potential when drafting, especially in the latter stages of your draft. There’s nothing wrong with having a bench with inexperienced players. In a perfect world, you won’t be counting on them much this season anyway, but you should also recognize that players often take two or three seasons to pan out, if at all. Is it a sound strategy to just throw away two or three seasons of your league for the possibility that all your picks will hit and your team will be good in 2024?

We’re going back to ’17 for a moment to make this point, too. NFL.com released a list of its top-40 offensive rookies for dynasty leagues ahead of that season. Here’s the top 10: Corey Davis, Christian McCaffrey, Joe Mixon, Leonard Fournette, Mike Williams, Dalvin Cook, Semaje Perine, John Ross, O.J. Howard, and Alvin Kamara. How’s the owner who opted for Davis, Perine, Ross and Howard feeling compared to the guy who got McCaffrey, Fournette and Kamara? There were real reasons to believe in all 10 of those guys, but it doesn’t mean all 10 worked out. Further down that list, a guy named Jeremy McNichols ranked right above Chris Godwin and JuJu Smith-Schuster.

Taking the established thing might seem boring, but it’s usually a lot safer. Besides, it’s not like every non-rookie is suddenly “old.” You can get a player like Courtland Sutton as your WR2 or WR3, and he has as much potential to turn into fantasy’s top receiver as anyone. Just because he’s not a rookie anymore doesn’t ruin that.

Waiting on QB might not be a good strategy

It’s popular in standard fantasy leagues to wait on quarterback. The position is certainly as deep as it’s ever been in a pass-happy league. Dynasty owners needs to think about the QB position more like a real-life NFL team does.

Quartebacks generally last the longest at their peak-performance level. They’re the most important piece of a football team. They get the biggest contracts because they’re often the most important and the safest bet on the field.

It’s true that not every quarterback lasts as a valuable asset forever. Andrew Luck retired; Robert Griffin III got hurt. But once you know a player is good, like Patrick Mahomes or even Carson Wentz or Jared Goff, they don’t normally fall off the face of the earth. There’s going to be more attrition at the other spots, so ensuring you have a good QB for years to come in your dynasty league is a viable strategy.

Football can always throw a wrench into plans, but if you have Mahomes or Dak Prescott or Wentz in a dynasty league, you can feel pretty set at the position for years to come. Every week outside of byes for the next five years, that guy can be your starting QB, while the owner that waited is wondering if Derek Carr or Baker Mayfield will ever figure it out.

The market inefficiency? The aging — but productive — veteran

You’re going to have to take my word on this: In every dynasty league I’ve ever played in, be it football, baseball or basketball, the aging veteran falls down the board at every tier. It could be LeBron James near the top of the draft falling to the end of the first round; it could be Drew Brees not going until something like the 18th QB off the board; it could be Clayton Kershaw falling below a bunch of young pitchers. The same tendency that leads owners to trend young in all their picks leaves the veterans that have produced for years sliding down, down, down.

Utilizing veterans in dynasty leagues comes back to understanding the shelf life idea from above. If half a position’s players aren’t nearly as good three years down the road, it doesn’t matter if a veteran is retiring in three years. The young player you would draft instead of them is just as likely to be irrelevant in three seasons as they are.

Besides, veterans are often more predictable in their output. Occasionally there are injuries or this is the season the sharp decline comes, but as our current bevy of veteran QBs have shown, they can often be the safest picks in a draft. Much can happen to alter your 2025 dynasty fortunes between now and then, so it’s not worth passing on a still-productive player solely because they might not be around then.

This doesn’t mean to pass on the best young players to take veterans, but youth and potential should more often serve as your tiebreaker than as the value-shifter. If Brees is much better than the younger quarterback you could take, like Sam Darnold, then you should still take Brees. Only if it’s closer to a tie, like maybe Brady and Goff, should youth be the winning argument in a dynasty league.

There are no guarantees in fantasy football, but the current season has much more certainty with it than anything to come in 2021 and beyond. That brings us to one of my favorite phrases: “Flags fly forever.” It’s a reference to a pennant/championship flag — no matter what happens in the future, no one can take away the fact that you won your league that year.

If you’re in contention at your league’s trade deadline, make the trade that could push you over the edge. If you feel like your leaguemates are drafting young, take the stud veterans they’re passing on. And like we’ve said about 20 different ways before this, who’s to say that your veteran team won’t be the more effective roster in two years, too?

Somebody has to win your league this year, even a dynasty league where much of the mental capital is spent thinking about the future. It might as well be you.